After a long lunch break the semi’s kicked off with the Swans drawing the form team of AFL Asia the Malaysian Warriors. Boasting quality players across each line the Warriors were gunning 100% for a clean sweep of AFL Asia in 2015. Coach Glendinning reminding his players how close the Swans had come in previous years and just how much heart would be required to make the next step and what this would mean to the Club. 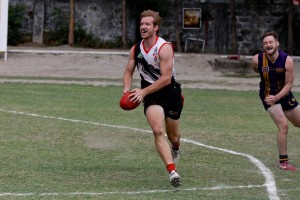 The Swannies midfield came out of the blocks providing the Swans forwards with more quality footy seeing the Swans steal a few early goals to take the early lead. The Warriors inevitably kicked into gear and responded well to go into the half time sheds up a goal and a half ensuring another boil-over semi final for the Swans to make a maiden Grand Final performance.

After half time the Warriors started to find space putting the Swans backs under the pump even further. The Swans big 3 defensive line of Swart, Pickert and Morrison with help from many others working hard to drop back and lend a hand stood firm, saving goal after goal with pace, strength and acrobatics managing to quash multiple Malaysian attacks and keeping the Swans hopes alive. Second by second the Swans pulled themselves back into the game.  James Bairstow went into the center bounces and got some hand on ball, Dave O’Shea was popping up everywhere and the Swans forwards began to be rewarded for getting in front controlling the contest. 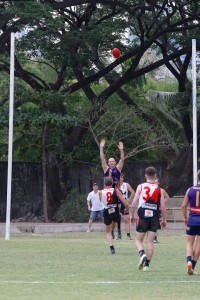 Going into the final few minutes the Swans were still a goal down, had the momentum and all the possession but just couldnt find the answer with a couple of narrow misses, surely they wouldn’t go down at this stage by less than a kick again, surely… Enter Bart Schneenan, playing across the forward flank Bart managed to get onto the end of a Swannies attacking effort and casually go back and slot it right through the centre off one step to give the Swans the advantage by two points with not much remaining.

The Warriors would win the next vital center clearance and push forward but could only find a behind to close the gap to one point. The crowd was on the edge of their seats as Mitch Hyde took control of full back duties to pump the ball to the midfield boundary towards an advancing Keysy who stuck the ball in his big mitts after running over the top of a few smaller players. Another deep kick along the boundary line to the Swans forward pocket and almost out of bounds, Sha Mac gathered and with seemingly nowhere to go, linked a handball back inside to Joe Vile who found Bart running down into an open goal to into kick the sealer. FINALLY the Swans had progressed to the finals stage in a top flight Asian Footy tournament, however satisfied with the amazing victory the players knew this wouldn’t be enough for Rowan back in Saigon… not yet!