(Except from Swans website http://thevietnamswans.com/swans-win-manila-cup/)
It was uncharted territory for the Swans but never before had the Club had such a great opportunity to take home some major silverware. With the home crowd behind them and a desire to get overturn their 2014 Manila Cup GF defeat, the Eagles started the better and more confident of the two teams going into the half 4 goals to 1 up, with the Swans mids just not finding the space they had been used to all day. 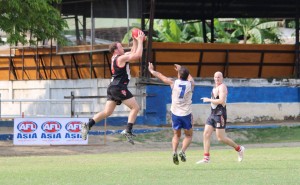 With emotions being tested, rather than going negative, Coach Glendinning went Zen at the half, urging his players to relax, breathe and play the footy they had been playing all day. It was just the tonic the boys needed and before long the Swan mids had several more possessions racked up, Timmy Pickert gobbled up mark after mark that came his way, Keysy had another couple of goals to his name and the Swans were right back in it.

The Eagles to their credit would never surrender and just when the Swans looked like they would run away with the game they responded to make it neck and neck right up until the final siren. If not for an inspirational Vaughan Swart smother that will be sure to be recalled for many years at the Cow, it may have been a Philippines victory. The final siren sounding with the footy deep in the Eagles forward line much to the relief of the Swans, giving them their first Manila Cup.

Emotional scenes would follow at the Manila Polo Club, with many years of effort and toil finally being rewarded. “The Boy from Bunbury” Jimmy Bairstow’s inspirational efforts to push through several injuries (and perhaps a friendly lunchtime chat) being rewarded with the Player of the Final and Tom Doer’s consistent play throughout the day, including several memorable on the run goals at crucial points in the game giving him the Player of the Tournament.

It was a great day for Swans footy which the boys would relish well into the night, never so proud to be a Swan with their medals firmly around their necks and the multitudes of well received congratulatory messages flooding in from current and former Swannies across the globe.